Thanks to the relaxed visa requirements enforced by Japan about two years ago, it has become easier and more convenient for Filipinos to enjoy Japan. The upcoming Summer Olympics in Tokyo, slated for next year, has also seen a boom in new AirBnB’s, new hostels and new hotels being built — in fact, one thing I noticed is there are also a lot of new capsule hotels, especially around the Taito (where Asakusa is) area.

Capsule hotels were formerly a novelty — first gaining prominence in the early aughts for overworked, sloshed salarymen who missed the last train home. While Tokyo (and Japan) is considerably safe that you can literally plonk yourself on a train station bench to get some zzzz’s; capsule hotels provide a temporary respite with a clean, sterile bed, a place to wash up and brush your teeth preparing the harried salaryman to another day at work.

When it first gained prominence, everyone was fixated on the novelty of it all: the cramped, tight spaces was the stuff of nightmares for claustrophobics everywhere. A close friend even compared it to sleeping in a coffin.

Well, lemme break it down for you. A capsule hotel or sleeping inside a pod is very far from being inside a coffin — think of it as your typical bunk bed when you were still dorming in university, or a mean cardboard fort you used to sleep when you were five. 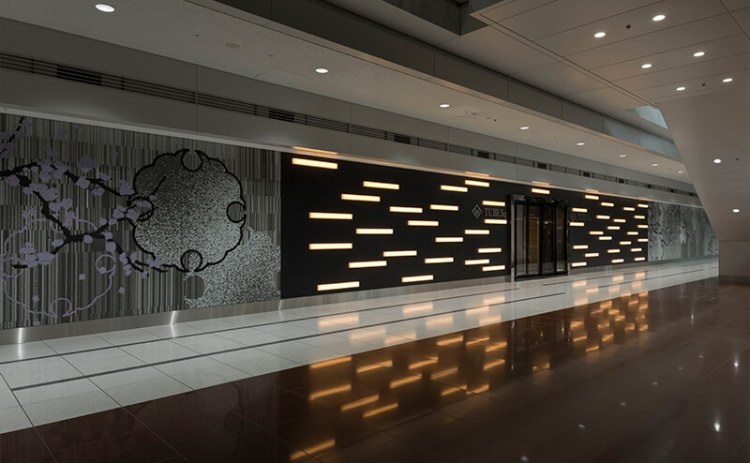 I finally got to experience what it’s like to sleep inside a pod during a recent trip to Nagoya and Hokkaido with my sister. Our flight to Nagoya arrived at almost 6AM; following midnight departure from Manila. We landed in Chubu Centrair International Airport, (which is Nagoya’s main air hub) hungry, sleepy and a bit cranky since we’ve both been up since the previous name. After a quick breakfast, we weighed our options given that check-in was still pegged at 2PM: a) we could slum it at the airport and leave at 1PM so we could be at the city in time for check-in; b) leave for the city right away, drop off our stuff at the hotel and explore Nagoya or c) sleep at the airport first, freshen up before heading to Nagoya at noon. Of course, we chose C.

The solution to our problem came in the form of Tube SQ, a sleek capsule hotel located at the Welcome Garden on the first floor of the Chubu Centrair Airport. The friendly receptionist advised us that we could avail of their promo rates if we will book online – so, we parked our butts on the beaches nearest the hotel and started booking online. While the standard 3 hours rate was at Y2,900 (roughly PHP1,450), we were not above taking advantage of the Y1,800 (PHP900) 3-hour stay online promo. So, in between smiles and fiddling through the Japanese-language website, my sister and I were able to secure pods which the receptionist then dutifully honored. In case you’re wondering, here are the standard pod rates for the capsule hotel:

Upon check-in, you will show your passport to the receptionist for record-keeping, confirm payment online and collect the key from the reception. The “key” was actually two keys hanging from a nylon rubber-scrunchy type that you can wear on your wrist for safety. You have a key for the locker where you will keep your stuff and another key which you will use to open the door leading to the ladies’ sleeping area. Before you head inside, you can freely pick a hot towel or wet wipe, a toothbrush kit and even hair ties on the side table near the entrance. 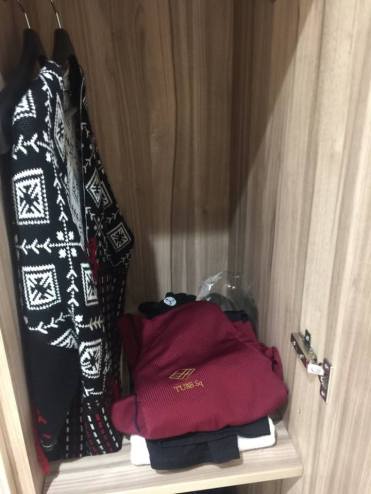 The first door you will likely see in the entrance is the women’s locker room. This is where you will deposit your luggage, coat and other stuff you have with you; and then change to the yukata provided for you. In the photo above, it’s the red top and pants neatly folded inside the locker. When staying at a capsule hotel, you are not allowed to use your every day outside clothes inside the sleeping area, hence the yukata. You will also need to change into slippers, and leave your shoes inside the locker. Aside from the yukata, you will be provided a bathrobe and towel in case you want to take a bath.

After changing: you have two options – you can take a bath or immediately head to the sleeping area. The bath is usually situated near the locker/changing areas; with a specific area for showers and for the toilet (should you need to do your business). The shower area also had beauty products (like shower gel, shampoo, and conditioner) per stall and a row of facial wash, lotion, hand soap on the sink, as well as cotton buds on the sink. There was also a row of blowdryers and baskets to keep your stuff in while you shower. 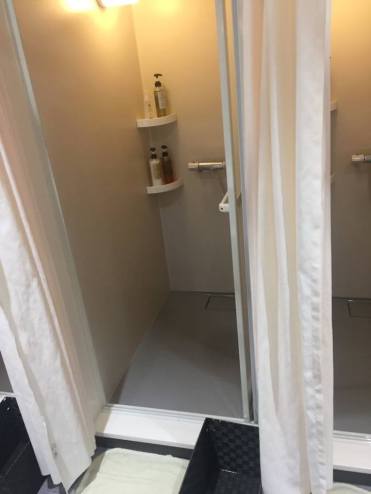 But since we’re really, really sleepy – we opted to sleep first and then freshen up later before we head to Sakai (which is central Nagoya and where our hotel was located).

Usually, capsule hotels have two large rooms, separating the men’s and women’s sleeping area. Tube SQ has a huge sleeping space and their pods are equally large as well. You will be allowed to carry your personal belongings (like a backpack or shoulder bag) inside the pod. Before parking your stuff just anywhere, look at the keys provided to you – usually, there is a number corresponding to the pod assigned to you.

The photo below was taken inside my pod, while I was trying to get work done before I become incommunicado for the day.

As you can see, it’s roomy enough to sit down and lay your stuff should you need to work. Inside each pod is a button to control the light and temperature; a hanger for your coat, an emergency flashlight, a small mirror, and really thick sheets and comfy pillows so you could sleep in peace. I was basically out of it for a good two hours, right after I’ve sent the email I was composing when I took the photo.  As someone who’s claustrophobic and hated tight spaces, I did not feel uncomfortable at all. Actually, I felt snug and comfortable and it was one of the deepest sleep I had. To think that just a few meters from where I sleep, planes were coming and going to and from the rest of Japan and the world. Instead of a door, we had plastic-like blinds which we pull down or up to open up to get in and out of the pod.

Promptly after three hours, we woke up and decided to head to the lockers to freshen up. We checked out as easily and went back to the concourse for our bus which will take us to the city.

A few things to remember when sleeping in a capsule hotel:

So, if you have a Japan trip coming and looking for a cheap place to stay, why not try a capsule hotel?