Like fashion, shoes and cosmetics, the love of Korean drama is something that is solely the women and the fashionable gay men’s territory. Korean dramas usually follow a certain formula — just enough of syrupy goodness to make every woman fall in love, a good mix of comedy to lighten the mood and gut-wrenching scenes that can tug your heart strings. Of course, there’s the adorable lead actor and his equally adorable leading woman, PLUS the super loveable third party (usually a guy) who everybody roots for but just can’t seem to get the girl.

And then, I discovered Bad Guys. 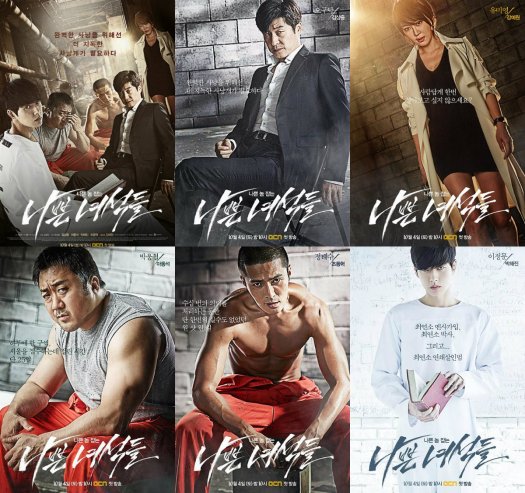 Bad Guys is a korean action-thriller drama featuring a tough, morally-ambiguous cop who decided to form a group composed of criminals or “bad guys” to solve some of Seoul’s most gruesome crimes. The group, headed by detective Oh Gu-Tak served as the de-facto leader looking after three criminals: Lee Jung-moon, boyish-looking and awfully quiet guy with doctorate degree in math and philosophy, the youngest member of Mensa, said to be diagnosed as a psychopath and is considered the deadliest serial killer in Seoul; Park Woong-cheol,a mob boss with a killer fist who stormed and punched his way on top of the criminal underground food chain and Jung Tae-soo, a hired hit man with an impressive number of kills. Ambitious police office Yoo Mi-young completes the group as handler of the three guys.

The drama follows a police procedural format where Oh Gu-Tak is called to solve the crimes riddling Seoul–a rampaging sniper killing people at random, kidnapping of a top mob boss, a roving serial killer — with the aid of the bad guys. Their methods might not be common or what’s considered right — but they get things done. The casting is great — as all actors seemed the right fit for their role. This even if there are times when Lee Jung-moon seemed to be channeling “L” (Death Note), that all he had to do is reach for a lollipop and adopt a very awkward posture.

The action scenes and the gore is top class. Bloods splatter, knives are pulled, faces are bruised due to solid punches and the usual baseball bat to the head. In a group where everyone seemed to be hiding something, it was the Police Chief Nam Goo-hyun who serves as conscience and moral compass. They get things done but along the way, they discover secrets, wracked a few kills and lose loved-ones.

This drama is so good that I caught the husband binge-watching online for episodes. The drama aired from October to December 2014 in South Korea but is just being shown now through Channel M on cable. Whatever the medium maybe, you can expect the Hubs–who is a bit averse to cheesy Korean dramas–to drop everything and watch. We are already on episode 7 and episodes are getting better and better. My favorite episodes so far include the pervy serial killer and the one where the guys took down a whole building of goons who were all employed by a creepy old lady dealing in illegal organ trade.

The camera work is also unique–heavy and dark and bursting with closed-up visuals. It’s no surprise that the Hubs is immediately hooked and is now going through bouts of worry because the series end by episode 11. Since this is a one-off thing, I will have to look again for an equally heavy, equally macho Korean drama series that can serve as another venue for bonding between me and the reluctant K-drama lover.