I am sure you have read and heard reports about the damage brought by Typhoon Haiyan in the Philippines, especially in Tacloban, Leyte (located in Southern Philippines) where the eye of the storm hit.

As you all know, the biggest typhoon in the world has brought massive damage to life and property and a week after Yolanda (Typhoon Haiyan’s name in the Philippines), the death toll has reached 3,631. This is still expected to pick-up, since thousands of individuals are still missing and are feared dead. Aid are starting to trickle to hard-hit areas where many are suffering from hunger, disease, malnutrition and trauma. 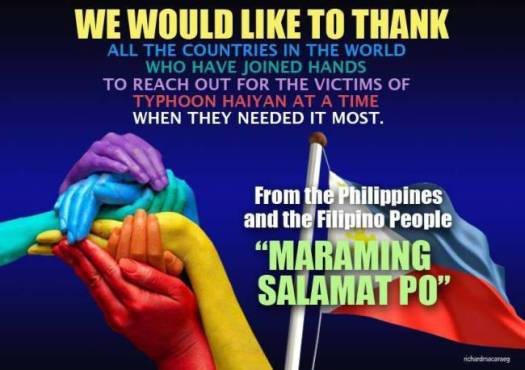 The massive relief efforts being given to the Philippines will not be possible without YOU. Yes, you and your country’s help to my country has been truly heart-warming. And in behalf of the many Filipinos affected by this tragedy, I would like to thank all of you for your prayers and for being part of a great nation that lent its hand to a country in need.

I do not know all of you — but a quick check on my reader map shows that this tiny blog reaches far-flung countries, countries I never expect to reach. So please, allow me to say thank you — for your generosity and prayers.

The Philippines will be able to rise again after this tragedy.

(NOTE: In the interest of transparency, the Philippine government launched Foreign Aid Transparency Hub (FAiTH) where people can view the total aid received and where they are going. See it at www.gov.ph/faith.