Following the hoopla on supernatural beings falling in love, going all emo on heart breaks, having sex and siring children and imprinting on innocent infants, I’m kinda glad that this stage in literature and cinema is over and done with. I mean, for how long can we be able to believe that the undead has living sperm cells in his loins which translates to a child with a severe case of “growing old quickly?”

But I am kinda delicately placing my pedicured foot in my mouth after I have heard about this adorable piece of work called “Warm Bodies,’ based on the debut novel of author Isaac Marion.

“Warm Bodies” tells the story of a zombie named “R” (that’s the only thing he can remember) who is slowly getting tired of his life shuffling around, walking and walking, grunting and moaning, raring to reconnect once more. But who does that right when you are already…uhm…dead? For a dead guy, “R” is still cute, in a colorless-lifeless-veiny kind’a way. During one hunting for food trip (i.e. hunting for living people they can snack on), “R” killed a teenager who gave him memories of his girlfriend, a girl called Julie”. He also ended up saving Julie’s life from the nasty zombies called “bonies”.

Anyway, “R” ends up falling in love with Julie, and along his discovery comes the change with all the other zombies who also starts “feeling again.” It’s a funny movie that does not take the genre too seriously. In a way, it reminds me of “Zombieland,” another amazing zombie flick.

“Warm Bodies” star the super hot and adorable Nicholas Hoult (who is also 23 years old! damn cute boys!) who starred before as “Beast” in X-Men, and yes — he was the cute boy in “About a Boy” headlined by Hugh Grant. Playing Julie is Teresa Palmer who also nails the “chick in love with an undead being” quite well.

Here’s some of the wallpapers they released in line with the movie promotions: 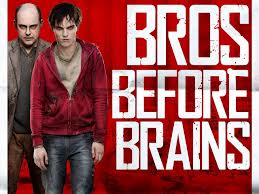 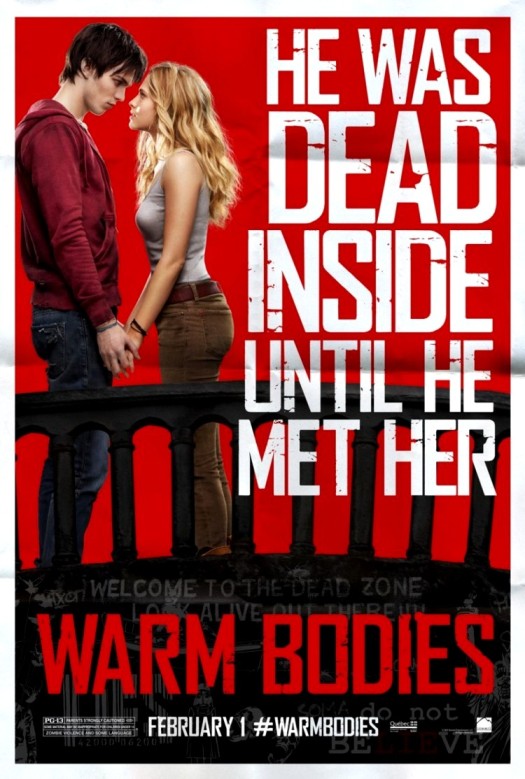 I know, the default reaction might be, “great. it’s another one of those movies,” but if the first four minutes of the movie is to believed — this one belies brilliant writing. I loved the wry sarcasm of “R” and how he express his loathing of the constant monotony of his “life” — because when you are a “zombie” what else can you do? I am sharing here the first 4 minutes so that you can judge for yourself:

I’ve read that one of the writer’s inspiration for the book is William Shakespeare’s “Romeo and Juliet”, except that in the case of “R” and Julie, they fell in love not in the midst of the Montague-Capulet squabble, but in the midst of a zombie apocalypse, i.e. “humans vs zombies.” I was also delighted that the director of the movie, meanwhile, looked into Edward Scissorhands as inspiration while filming. So, I was just too delighted — knowing that two of my favorite piece of literature (yes, E. Scissorhands is a classic literature for me) is an inspiration for this movie.

I guess right now, my problem would be if this movie will be offered here by local cinemas. I haven’t seen a trailer yet, but my consolation is that I am not much into movies that’s why I don’t get to see what’s showing or not. Hmmmmnnn… must then check the local listings and pray that for once, there’ll be something good showing on Manila cinemas other than execrable locally-made comedies masquerading as “Sex and the City/Gossip Girl spin-offs” and “mistress-centric hair-pullers offered as tear-jerkers.”

One Reply to “Why do *zombies* fall in love?”