I know yesterday was Easter.
As you know, I am not melodramatic about things, but something about attending the Stations of the Cross made me take stock of my life. That, and that a perfectly healthy (in one way or the other) neighbor just dropped dead just when he was last seen minding his own business.

Further underlining the transience of life, then leading to rebirth.

I am thirty three years old–I don’t look like it on the outside (people mistake me for 23 years old), but inside–I feel the creaks and hisses. The body ain’t doing well anymore, no thanks to the abuse courtesy of endless working, partying (when I was younger and was working as a reporter) and abuse and neglect and eating unhealthy foods. After spending the Holy Week dealing with a hacking cough and icky phlegm and non-existent voice, I realized that I am not getting younger. Abusing my body can only take me somewhere not that far. And I still have a lot of dreams.

Yesterday, after hearing Easter Mass and meeting The Queen and the Baby Bro for dinner and windowshopping, I realized that I am about to turn a year older in less than a month and it’s about time for drastic changes.

First to go, I hope–is the unhealthy habits such as drinking too much coffee, eating shitty food before sleeping or not eating at all when busy. Oh, and I also needed to go to a Endocrinologist because I am mad sure that there’s something seriously wrong with my hormones.

Second, and I shared this publicly and even on Facebook so that I will not chicken out when the time comes, I plan on throwing away all my old clothes (office and casual clothes) because I feel like I am getting too old for some of my shit. 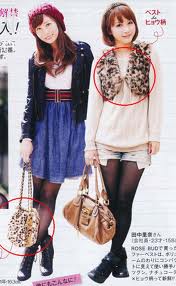 Thing is, there will come a time when one will get tired of looking like an extra from a 2NE1 music video or a Fruits or Nonno Magazine reject. Yeah, it may look fly when you’re 23 years old but when you’re way past your 30s and working as a manager for a big company, going to work looking like this is not exactly sound decision. I don’t know, it just got old to me. If you think I am selling out, it’s not really the case. I will still continue to pursue my own manner of dressing and will still try my best not to look like one of the herd. I just don’t want to look like I was trying to hard. Plus, I really have to earn some cred at work. It can get very tiring being treated like a sixteen year old kid, you know? Like the one who loves comics and Japanese fashions and dresses like she is going to a Jpop or Kpop convention.

Third, I am improving my finances by actually knowing about good financial health. I’ve read some books and I will start working on our books on the 25th, after I get a windfall from the office. I’ve read somewhere that I should stop buying things that “depreciate”. So there goes the plan to splurge on a Samsung Tablet especially since my Blackberry is still doing fine. Also, I’ve read that I should actually save on three “baskets” — one for emergency needs, long term savings and one for expensive wants.

Again, I keep thinking that I am still a work in progress. Hopefully, when my birthday rolls around, I am a much better person that I previously am.