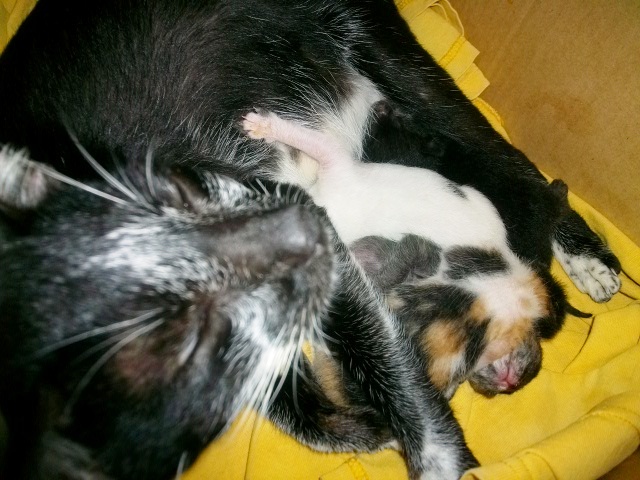 Sayuri gave birth to a healthy litter of 4 kittens — as usual, the kitties are a mix of Sayuri’s (and whoever maybe the danged father)colors. But what made the hubby elated–so elated in fact that he called work to say he will be absent last night–is the fact that his spoiled, little monster finally gave him a pure black kitten.

I have to give it to the Hubby for his pure dedication–he actually helped our cat give birth while SMS’ing me on the side just to give a blow-by-blow account on the progress of the actual birth. I now understand why Sayuri loves him more than she loves me. So much so that she follows him around all the time. Maybe the cat realized that the Hubby is more of a sucker than bitchy ol’ me.

Anyway, this is the fourth time that Sayuri gave birth and I think this will also be her last. I have long contemplated on bringing her to the vet to get neutered. While the procedure is scares me shitless since I have no idea what will happen to my beloved cat, deep inside I know that this is the right thing to do.

First and foremost, I have to be a responsible cat owner. I can’t sucker all my friends and relatives forever into accepting her litter. And throwing them out in the streets is out of the question either since I can’t imagine them being hungry and exposed to the elements at a very young age. I hate it when people throw kittens in the street as if they were like garbage. There are also a lot of animals in the city that may prey on them (true story: my dad’s office caught a five-foot long python inside their office premises, just a few blocks away from our place. I can’t and I refuse to imagine the little kitties turned into snake food). Plus, we all know how reckless Manila drivers can be and road kill usually scares the hell away from me.

Second, I don’t want to see Sayuri go through hell again. This last time, she lost a lot of blood, not normal since I saw her gave birth before. It’s endangering her life and I don’t really wanna risk her getting pregnant again and going through the misery of pushing out all these kittens one by one. The Hubby told me that she really went through the wringer during this one, and it’s a good thing that I didn’t get to see her so helpless and in pain.

And third, getting her neutered will stop the neighborhood toms from chasing her like mad whenever she goes in heat. Usually when this happens, she will go home with neck bites and claw marks. It’s no longer healthy and safe for her to go through the same stuff again.

I am just waiting for Sayuri to stop nursing the babies, maybe in three months’ time and that’s it. I just have to overcome my fear that she will be harmed when I finally get her fixed. I also have to stop thinking that her wound may get infected or may suddenly lose a stitching because paranoid thoughts like this will only lessen my resolve to get her neutered. This is the right and the responsible thing to do.

Any good recommendations for a vet?