My family and I had great ideas for the past long weekend but my work obligations has made me the great vacation-pooper for the family.I spent pre-dawn Sunday being a first-class work slave, executing ideas for an event that is not my department’s doing.

Anyway, to make up for lost family bonding time, we all agreed to check out Manila Ocean Park, the local version of the one found in SG and HK. Suffice to say, we were very excited since this will be our first time to see the famous attraction.

Well at PHP600 a pop (PHP599 to be exact, includes trips to the Oceanarium, Magical Fountain Show and a hotdog and coke combo from local concessionaire Quik Bites) — the experience was a small, unexciting YEY at best.

Located at the back of the Quirino Grandstand in Manila, the park cannot be faulted for trying its best to provide Manila denizens with the opportunity to come face-to-face with the wondrous creatures of the sea. In fact, the park also espouses proper care of the environment and appreciation of our seas and oceans, the natural habitat of the animals on display.

Indeed, it was an amazing idea and a lofty ambition that is mangled with poor execution.

Where shall we begin the griping?

1. The lack of organization. The ticket counter line was long and unorganized and no one from the crew stepped up to make it more manageable and less chaotic. There were four ticket counters that could have been maximized.

This problem with lines also became prevalent early evening when the park staff implemented one organized line for the Magical Fountain Show, then they themselves disregarded it when it was time to enter the exhibition area. In exact, they encouraged people to have a go even if there’s a line.

2. Chaos and lack of great presentation skills – Tell me, if you are a paying customer, will you find it enticing to see things that are half-finished, or wires and steel bars jutting out of empty space. Will it be appealing for you to see half-finished places of the park?
I know it’s quite impossible to avoid repairs and all that, but maybe it’s better if places being serviced will be sealed off to public so that we don’t get to see them until they are ready.

3. Cleanliness issues – Quik, one of the concessionaires of Manila Ocean Park seriously lacks cleanliness training for their staff. Foods like uncooked burgers and hotdogs were exposed, the guy dispensing the food was putting them on dirty trays that I even had to point out that the tray was freaking dirty.

The food was a big disappointment — overpriced and dry, and without any semblance to real food at all. I am guessing our server was tired already because he was just plonking the food on the tray without any care if it will fall of or not. Siopao tastes worst than the one I used to buy for PHP5 at my old elementary school, the hotdog sandwich was passable though the bread was as dry as The Sahara — and the nachos! the nachos was dry and has lost its crisp, the cheese looked like cheese whiz mixed with hot water. The food was forgettable so if you have extra money I suggest you spend it at the other food shops inside Manila Ocean Park than face the same disappointment that we had.

Let me be clear in stating that I write this not to discredit the Manila Ocean Park. In fact, I find its advocacy of bringing awareness on ocean and water conservation worthy of praise. It is with hope that readers find what I stated as constructive criticism and will push the management to improve on some of their weaker points.

Now, we go to the positive:

The park clearly state “No Flash Photography” — so you can expect the crowd NOT to effing follow the rules and use flashes when they take their pictures, effectively distressing the fishes.

My countrymen never fail to depress the hell out of me: they don’t follow rules, they leave their garbage just about anywhere they hell please (i.e. the disposable rain coats were disposed everywhere but the garbage bins) and promptly walked out of the Amazing Fountain Show performers even if the show isn’t over yet (the performers were doing their danged best to perform in spite the inclement weather the best that we can afford them is the courtesy of not leaving while the credits are ongoing and they are bowing to the audience). The fact that some people can be careless, uncaring, law-breaking morons depresses the hell out of me. Why do I even share the same citizenship with morons such as these?

Anyway, in spite the endless litany of complaints, I had fun spending time with the folks and the hubby and my two sibs. The fountain show saved the park trip for us since it was amusing and the lights show was amazing. 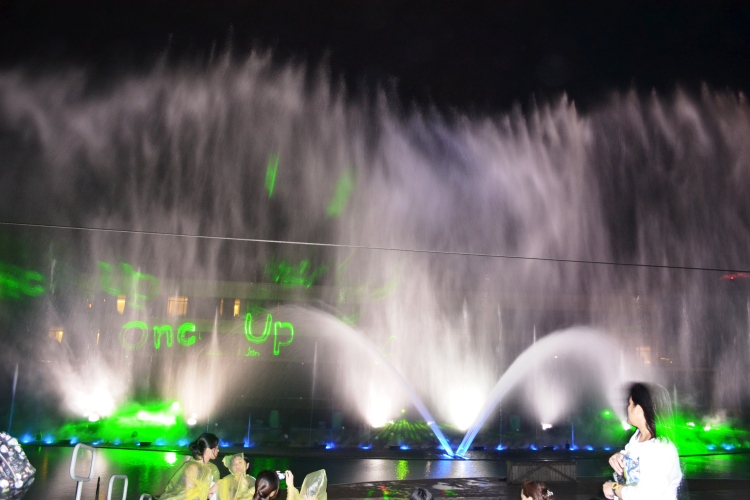 I noticed that there was a lot of new attractions or facilities being built –I hope that when–or if I come back, The Manila Ocean Park is better than ever. And I know and believe that the park is capable of evolving for the better.