The world we live in is one sick stage. Consider this “thing” we saw at the Landmark Department Store:

The sis, the hubby and I were looking for new clothes when we came across this “shorts” (or are they denim panties?) — and we ended up laughing our heads off. 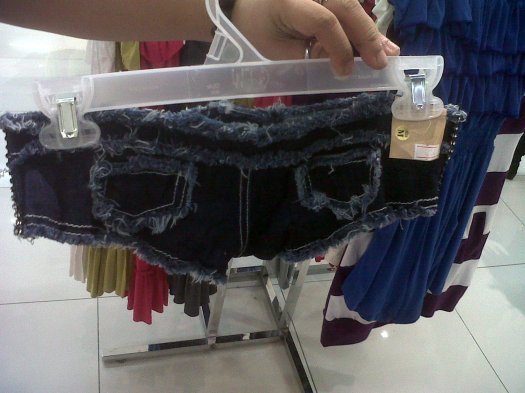 We were arguing if they were panties or shorts — obviously, they were way too short to be shorts, unless the wearer count displaying her ass cheeks and more to the whole world. Obviously, the term “shorts” were coined to describe the breezy, casual bottoms for women — but this pair of shorts is taking the term way literally. My guess was that they were shorts, for obvious reasons (like they were denim and designed as shorts).

The Philippines has a distinct call for it: “pe*p*k” shorts or vaj shorts.

However, the Queen believes that they were meant to be worn as panties. I was livid and told her, “Can you imagine how uncomfortable denim would be when scratching against your… then we started laughing non-stop on the department store floor. I am curious really, were these meant to be worn as panties? Because if they do, I can’t just imagine the havoc (and the pain!) these would bring to the organ down there. Imagine how uncomfortable this maybe? And if these were shorts? Who wears them anyway? Thirteen year olds? Cos if I have a kid sister who parades wearing these, I will definitely make sure that she’d never walk again. This is something you wear when you want to be violated. And I couldn’t imagine any person wearing these while walking on crowded streets. Well, if you are not Lady Gaga anyway.

I still find it weird that someone even manufactured the abomination. Not only was it insensible, the design and the cut was downright ugly. It is offensive and not meant to be worn by kids.

The reasoning really baffled me. Did the designer woke up and thought that, “wow! i need to make a short that is more like a panty?”

As always, in this cruel and crazy world, sex (and the amount of legs shown) sells. This short-ties is one of its biggest agents.