Though I have read some of Haruki Murakami’s novels (the most recent is Kafka on the Shore) — this novel holds a special place in my heart because of the title and the theme of the story. As some of you knows, I am a big fan of The Beatles–maybe in the same vein and love as that of Arashi and Incubus.

When I heard that Tran Ahn Hung is making a film adaptation of this movie, starring my favorite Japanese actor, Kenichi Matsuyama–that’s when I knew that I REALLY had to get it. What followed of course is the blind obsession to find a copy of this novel. Surprisingly, it seemed all copies disappeared at the same time just when I was looking for a copy. 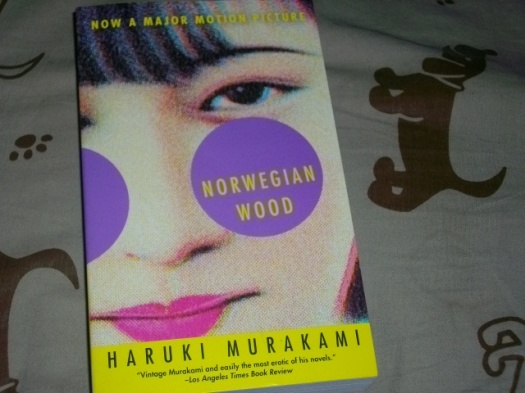 I intend to start reading this as soon as I get off the cyberspace. I really miss reading. Sometimes, I feel like my reading and quiet times alone had suffered immensely ever since I got Momo and became a permanent fixture in cyberspace. I used to devour books as if they were gummy bears, but now— reading became a “hit-and-miss thing”, one which I put off when I no longer have the time.

The last book I read was “Into the Wild” by Jon Krakauer, an account of the two year journey of Christopher “Chris” McCandless (aka Alexander Supertramp) who gave up a university degree and a well-off life to live the life of an adventurer, tramping in the desolate wilds of America. Chris McCandless died in 1992 after camping for 100 days in Alaska.

I first saw the story of Chris McCandless in a movie directed by Sean Penn and starred Emile Hirsch (with a pre-Twilight Kirsten Stewart in a small role). It was truly a dream life, to travel and don’t have a care in the world–but of course, also a life marked with disappointments and danger.

Having a sister who is also very much into camping, hiking, mountain-climbing, I came across the book lying in my sister’s bedroom. It was truly an enlightening read, even as far as discussing the force the drives young people to abandon a life of privilege and comfort just for a life away from material things and the worries being in the great rat race. I understood what compelled Chris to abandon a university degree and a privileged upbringing, but there were a lot of things he did that I don’t agree.

I finished this novel three weeks ago and I hope to finish reading Norwegian Wood within the week and move on to another book. I really miss reading…I miss the adventures that go with curling up in bed, with a good book in hand.