Remember my post yesterday about Asahi Shimbun’s special feature on Arashi?
Well, it seems my Jimusho boys is doing the publishing industry a favor, because sales for Asahi Shimbun (well, in particular the February 3 issue at least) is shooting up–thanks to the adorable manga representations of the boys.

Here’s an update from (one of my favorite Jimusho sources) momoedgewood:

While newspapers struggle with dipping sales, special Arashi pages in Asahi Shimbun have had everyone and sales buzzing, reports J-CAST News on February 4. 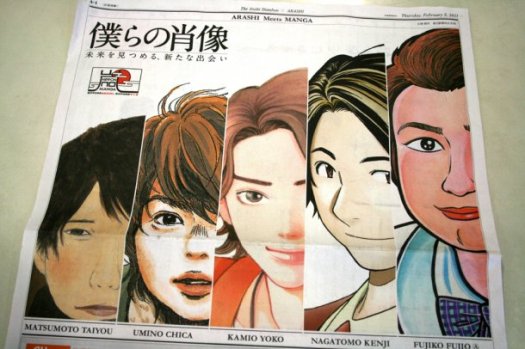 The newspaper feature “ARASHI Meets MANGA 僕らの肖像 (Bokura no Shozou)” took up eight pages of the national newspaper on February 3. Each Arashi member had been drawn into manga form by a manga writer who was responsible for creating one of their drama roles. Taiyo Matsumoto (鉄コン筋クリート, Tekkon Kinkreet), Chica Umino (ハチミツとクローバー, Hachimitsu to Clover), Yoko Kamio (花より男子, Hana yori Dango), Kenji Nagatomo (Bartender), and Fujiko Fujio A (怪物くん, Kaibutsu-kun).

It has been reported Asahi Shimbun’s advertising office had stated they ran the special because the group were Japan’s tourism navigators, and one of their responsibilities is to promote Japan to the overseas market.

“Arashi have been given the task to send out a message to people overseas about what makes Japan unique while these manga writers have already shown they can send powerful messages overseas. Our aim was to show people how amazing Japan is by getting these two groups to collaborate,” they said.

It has been reported the special was run because it was a chance for the newspaper to do something big and would help pull in younger readers. Another reason might have also been because it was a good way to promote Masaki Aiba’s new drama “Bartender”.

Either way, when the newspaper hit stands on February 3, it became so popular that a growing number of train station newspaper stands had sold out of all of their copies.

The newspaper soon became a popular topic on Twitter, where a number of fans and non-fans tweeted about the special.