I am really tired today so, I will not post as much. Just been through a twelve-hour shift, and I don’t even work for the call center industry.

Anyway, please enjoy these lifted articles courtesy of TokyoGraph, while images are courtesy of this site: www.natalie.mu. Apparently, my dear Stormy boys was featured at the Asahi Shimbun in manga form– thanks in part to a collaboration with the top manga artists in Japan.

FROM TOKYO GRAPH: “The February 3 issue of the Asahi Shimbun newspaper featured a special collaboration between boy band Arashi and a few manga artists, titled “ARASHI meets MANGA.” The 8-page feature included illustrations of Arashi’s five members, drawn by the artists who did the original works behind some of the dramas and films that they have starred in. Each of the members also gave their thoughts on those works.

The illustrations were drawn by:

Here are the illustrations: 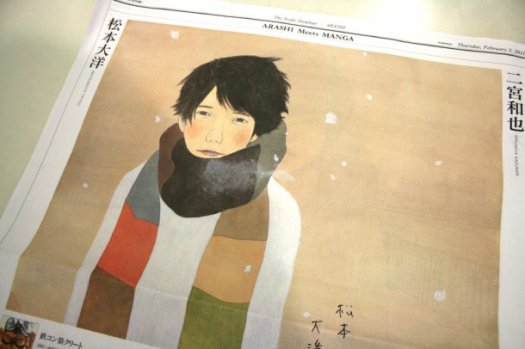