There must be something in the way we tell the universe our heart’s little desires. Because IN SPITE OF and DESPITE OF, things will happen if you will it.

Well, guess who was at Darren Criss’ show last night? 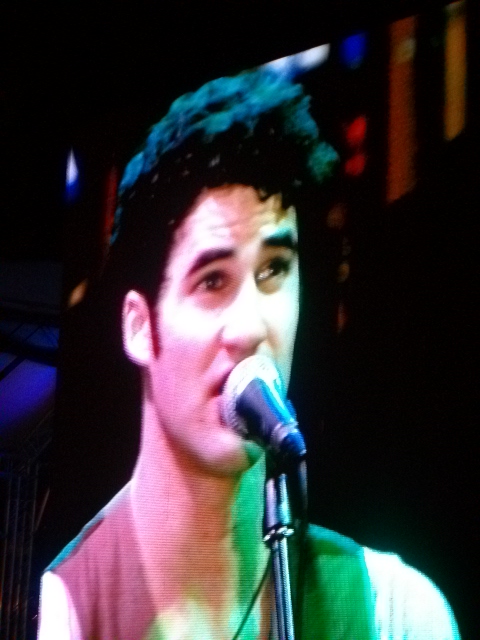 Wanna hear the story of how I managed to be there? Well, even if you don’t wanna hear it–I’m still gonna spill:

Because I was really pretty much bummed at work (long story) and because I feel suffocated and very much raring to see Darren Criss perform — I filed for an undertime. Yup, me — who chose to work in spite of and sometimes misses out on in-laws events due to work casually announced that I am leaving early due to “some important engagement”.
I then walked — no — SPRINTED twelve blocks to where I was working to Greenbelt Mall where the show was held. When I arrived, the place was packed. It’s like a free showing of a Manny Pacquiao fight, the only difference was that the audience were in stilletos, pretty dresses, has colored hair and busting out the Queen’s language in varying accents. There was a sprinkling of the masa crowd, who was there to ogle “artistas” and the local Gleekdom who came prepared with their cute banners. By some magic, I found myself at the front, inches away from the cordoned area and in front of a very kind security guard who let me placed my bag at the restricted table and even adjusted the cordoned area so that I will be comfortable.

Universe, I am so in love with you when you make things happen…

What can I say about Darren Criss? Talented? Charismatic? Charming? Prolly ranks up there when it comes to guys with kick-ass voices? Yes. That and much more.

He is just so amazing. Hands down–my favorite Darren Criss songs include “Jealousy”, “Part of your World”, “Sami” and his rendition of “Teenage Dream” (!!!). And yes, I can’t help myself — I purchased a CD, with five songs and worth 200 bucks. This is one of the best things I bought last night.

Anyway, now that we have all the giddy and beautiful things down pat, let’s go to my list of rants. Oh, you think I don’t have one due to the Darren Criss luuurv, I am sorry my loves, this wouldn’t be KamikazeeGirl without the rants. Surely, you didn’t take me as the “sweet and peppy” kind, right?

Anyway, to the woman beside me who I had the fortune of being squished against for the longest hour and a half of my life, may I offer a suggestion? If you have plans of attending a concert or any activity which requires close proximity to other human beings for that matter — can you PLEASE for the love of God — use a stronger antiperspirant. I don’t want to be rude, but you smelled like rust the whole time I had the pleasure of being acquainted with your (very wet) back.

And to the oaf beside my sister, do note that it was never funny when you try to mock the artist by shouting (in your best–albeit, very pathetic–macho voice, “I love you Darren”. First, you really sound desperate for attention, and second — it may be funny the first time but when you tried the stunt for the fifth and final time — I had the strong compulsion to knock you glasses out of your face. In short, you weren’t funny, you’re just sad.

And oh–to the peudo celebrities acting like they were waaay above us puny humans just cos their face value gets them access to the cordoned area, I say its just sad that while fans would give an arm and a leg just for the chance to appreciate the music more, you were just goofing off in your VIP seats, taking stupid SelCas, or just texting or calling people saying you were inside the VIP area at the show. You were doing everything you could prolly do, THAT IS except sit and really listen to the really talented person right in front of you. And it’s such a shame really.