Here’s my office desk a good two months ago:

…and last Saturday, around 5PM: 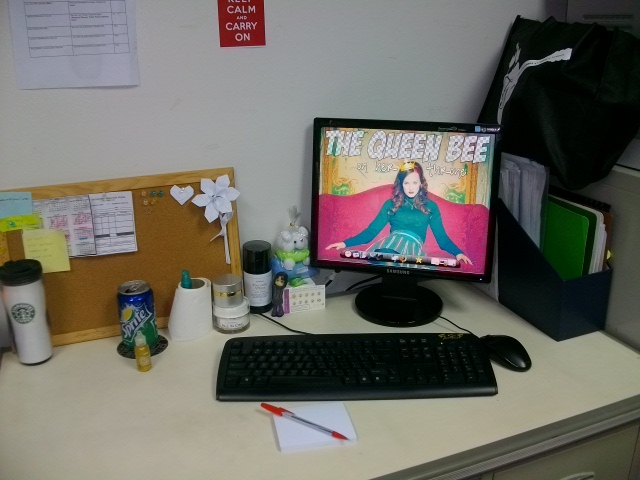 I wont deny that I feel a certain sadness seeing the once “busy” desk left empty. There’s an unspoken melancholy in opening empty drawers, used to be crammed with papers and stuff– now rattling noisily due to an occasional pen or two, The pictures, which used to line the wall was now taken down and filed, never to be seen again. The toys which used to sit idly on the desk are now bagged and taken home. Even the pens were given hastily away to a new owner.

It was quite obvious, really, that the person who used to sit on the desk is leaving and never coming back.

I’ve had good memories of my (soon-to-be former) work. I have high regard and respect for the people who run the office (especially the HR and Finance Directors) and I have been fortunate enough to have met wonderful people in my one year tenure at the office. I have filed for terminal leave in order to at least rest (even for a week) before I start on my new and more challenging post in my new company.

My year’s stay has taught me quite a lot–and made me realize my priorities in life. In spite of everything, the company has brought my health back, ably nursing a wounded ego and confidence from a not-so-good ending with my previous work. I was sick, dejected and lost (professionally) and this company has nursed me back to my fighting form. For that alone, I will forever be indebted to the kindness of this company. Though, I will also not deny that while I have experienced quite a number of highs during my year-long stay, I have also been subjected to record-breaking lows during this tenure.

Last Saturday, while I was filing away papers and cleaning up my desk, I couldn’t help but feel a certain sadness. It was like when Holden Caulfield was standing up the hill at Pency, trying to muster up a goodbye — it was the same feeling I had while standing by my desk, sorting papers and putting away stuff. It occurred to me that I was trying to “muster up a goodbye” — I guess, I just wanted my self to know that I was saying goodbye to the place…and while I may still be reporting for work (for clearance) next week until the 23rd of the month, it’s not really the same thing anymore.