Why? Why!!!!??? Can’t it just stop with ONE CAMPAIGN and then we move on? Should we give rise to another advertising campaign–which for the life of the PR and Marketing person in me can’t even accept.

As much as I am seriously in like with MatsuJun, this is one of his commercials which I can’t seem to love. Even for an effing bit. 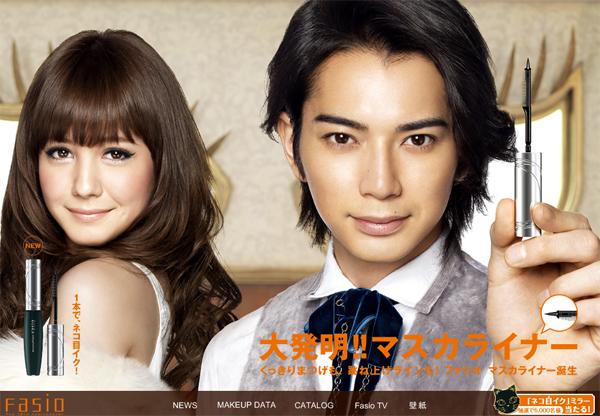 My hubby from the parallel universe doesn’t really look good in this campaign. My only consolation is he is no longer sporting that weird wavy, curly bob that he had on the previous campaign and there were no weird giant eyelashes growing on every effing furniture! No amount of fan girling lurrrrv can stop me from looking the other way. Oh, I effing hate this brand for not coming up with a better brand campaign for the MatsuJun. As someone who earns her keep thinking and breathing ad and marketing campaigns–I am compelled to stress my indignation for having to see my (make-believe) hubby having to star in a commercial that (yes) is VERY FUNNY, but does zilch, nada, zero to his cool factor. You guys should hire me–I have tons of ideas and you don’t even have to pay me big bucks. Just bring me to Japan and set me up on a (WHOLESOME) dinner date with MatsuJun!

You won’t be seeing your KamikazeeGirl wearing Fasio MascaLiner anytime soon — unless, the MatsuJun would personally give me my own.

Thanks TokyoHive for the heads-up