As previously posted, I have taken it upon myself to visit the new Forever 21 during its opening week.
I did not have the balls to skip work when it opened Friday, never mind that those who attended the early opening got PHP200 voucher. I told myself that I’d rather go on a Saturday or Sunday, where there’s already less people in the store, compared to its opening day.

To say that I was mistaken is a major, effing UNDERSTATEMENT.

I almost shed tears when I saw the much anticipated sign on the store front “Forever 21” it says. But before I was able to go inside, two burly guards (as in bouncers you usually see during concerts) blocked my way and said politely, “ma’am, yung line po to go inside is nasa gilid”

So, I turned left and this is what I saw:

Baby Brother and The Hubby wanted to back out. Spending time with a hoard of stampeding women is not exactly their idea of a Sunday afternoon, but luckily the Queen declared, “We’re all going inside. Kaya nga nagpunta si ate sa Megamall is because of Forever 21. Utang na loob, isang linggo na nyang bukambibig yan!” So we all fell in line, but not without a warning from the Baby Brother, “We’re falling in line but you’ll hear it from me if you don’t buy anything!” 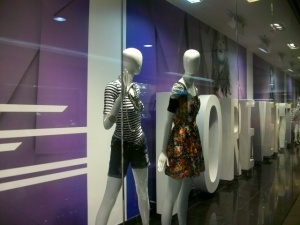 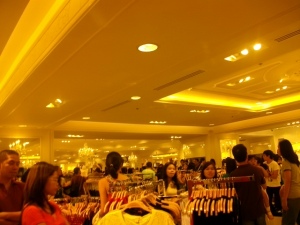 I love my new acquisitions from Forever 21! I am actually looking forward to the next pay day cos I wanted to buy these cute rubber shoes that was already sold out on the second day of the store opening. 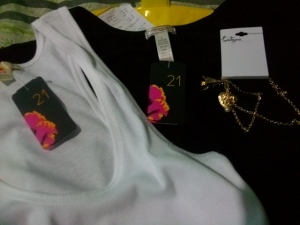 I only spent 600 bucks for all my purchases that day, beside me a middle aged woman racked up close to 10,000 bucks in her bill. The general atmosphere in the store was that of pure chaos. People were rummaging from racks and racks of clothes. If you ask me, there are stuff that is really cheap compared to other foreign brands, but there are also other stuffs (like dresses, bags) which you can buy at SM or Landmark at half the price. Point is, shop intelligently cos the racks and racks of PRETTY clothes can make you lose your mind and forget your budget (if you have one).

One Reply to “Stuck on Forever”