You do all know that I am not the biggest fan of Pinoy movies, much more Pinoy actors. I don’t know why I refuse to be smitten by local young actors–when in truth there’s a lot of pretty talented and handsome young actors out there. Case in point: Coco Martin, Ryan Eigenmann, Jericho Rosales and TJ Trinidad–these are pretty handsome and capable actors yet no one were able to replicate the feeling of “awww, shucks he’s just so gwapo” that looking at Jun Matsumoto or Daniel Henney brings.

But then came Robin Padilla, on his recent reincarnation as Head&Shoulders endorser and Wowowee host.
Can you say OMG? 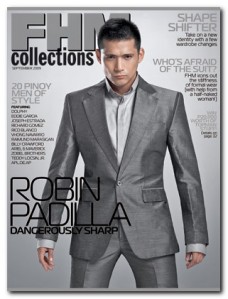 From being the “Bad Boy of Philippine Movies”, Robin morphed into an all-around actor, plus a credible product endorser. When he stopped wearing those (funny and dated) leather jackets and started wearing the suit, along with the narrow necktie–he literally transformed from bad boy to heart throb.

With the stupid outburst of the original host of a Philippine noon time show, Robin was tapped by Channel 2 to temporarily sub as its guest co-host. People freaking loved him!

Here at the office, Robin rules lunch time conversation and videos of his Wowowee debut kept on playing on individual PCs. We gush and heap praises–quite a first coming from a group of people who claim to have an aversion to local mainstream cinema.

Well, Robin Padilla, it seems is the great equalizer.

5 Replies to “From bad boy to heart throb…”